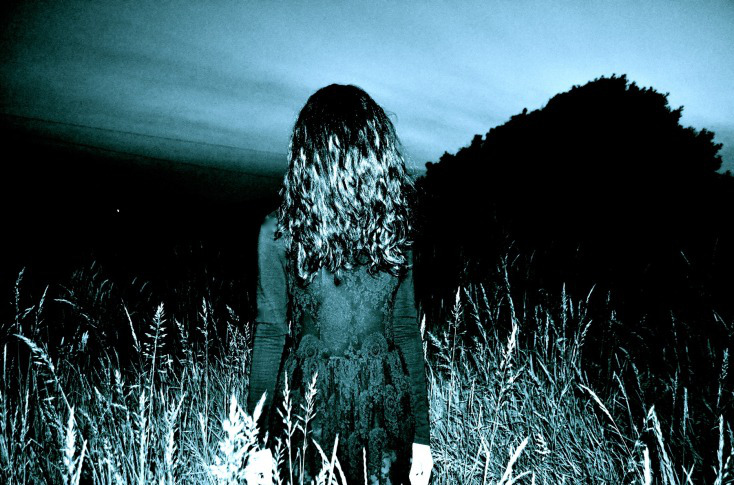 In early 2013, Hilary Woods, who since leaving JJ72 had been busy with other things, returned with a solo album under the nom de plume The River Cry. Few were expecting her return, it’s fair to say, and there were no preconceptions, and to come upon a fully formed set of songs as deft, warm, and indelibly melodic as The River Cry was one of the surprise pleasures of last year.

Now, under her own name, Woods has released Night, a four-track EP that moves elegantly on from The River Cry and includes one of the most straight-up gorgeous songs of 2014, ‘My Daughter, My Gold’. I use the word ‘stunning’ a lot when I like something, but ‘stunning’ is the wrong adjective for Night, because Woods doesn’t feel the need to stun.

The songs on Night are patient, not panicky; they are confident enough to know they deserve your attention. Woods says she was watching The Tree of Life as she recorded Night and, dense as the four songs are with allusive imagery, heading straight as they do for the subconscious, you could certainly make a case for Night as Terence Malick music.

State: The response to The River Cry was great – but were you apprehensive about returning with music of your own, and how did you find the experience of coming back with the album?

Hilary Woods: My need to just record and document my songs – to tip my toe back into the water so to speak albeit on my own! – outweighed any apprehension I might have had. Although I felt the courage required of me to do it but it was exhilarating in a way. I just took the plunge, went for it, and learnt a lot whilst doing so.

What did you learn?

I think what I learnt, or acquired, from putting The River Cry out was a new found assuredness in where I wanted to go musically. It possibly took my releasing The River Cry to focus that lens.

I note your use of the word “need” -“my need just to record and document the songs”.

I think it became a need, yeah. I thought about it a lot and I knew music was something I wanted to return to wholeheartedly. The voice inside my head saying to record and release a record just grew louder with time.

And before returning you were painting? Is that right?

Yes. I left JJ72 and went into painting. It was my go-to. I got a lot out of that, and it’s fascinating what shows up on the canvas. In many ways painting was a source of respite for me. I liked the blank canvas – that sense of possibility. I also liked the manual labour involved in priming canvases, makin’ em, getting my hands dirty.

And you were busy being a mum.

I had my daughter early on, yeah; it was a juggle pursuing stuff that I wanted to do and negotiating motherhood simultaneously. It made me more precious with my time and choosy as to how to spend it!

‘My Daughter, My Gold’ was the song that grabbed me as I played Night for the first time. I have a small daughter, and I heard the line “I’ll need your hand when I’m asked”, and I’m quite concrete, and I thought “Hey, a song about holding your daughter’s hand”. But elsewhere there are darker images – “These trees are phantoms of his evergreen eyes”, and references to a forest burning, I think – and it sounds unsettling.

Well, lyrics are incredibly important to me. I love words and word play, and finding the right lyric is immensely satisfying. I guess the song ‘My Daughter, My Gold’ itself acknowledges some part of our journey together and the gesture of holding your child’s hand is so beautiful and arresting; it seemed a fitting image to convey the sentiment I wanted to evoke. Albeit in this instance it was her taking hold of my hand!

I think the verse you’re referring to is “But forest paths lead to unforeseen / Places and ways of being / And things they grow in the womb of the night / Toward light toward seeing“. So it’s “grow” rather than “burn!”

I guess the image of things growing in the dark was key to this song. And trusting that things may be manifesting somewhere even though they might not yet be visible!

There’s something very touching about songs written from the perspective of a parent. And there are so few of them.

When I write I just follow the threads that come out. I don’t go into it knowing which perspective I’m gonna take. but come to think of it, I agree – there’s not a whole lotta songs from that perspective!

As you tell it, ‘My Daughter’ sounds like a song about finding your way as a mum; as a family. Like what we all do – not having a clue but kind of knowing, somehow, it’ll work out. As you sing: “It’ll be alright / My bones tell me so”.

Yes, I guess it is where a lot of the sentiment in the song comes from. Going along, getting through the day not really knowing where you’re at; paving your way through the familiar and not so familiar.

I love that image: “It’ll be alright / My bones tell me so”.

I liked “My bones tell me so” too. Your bones always know, right?

View all posts by Niall Crumlish